“Seven Dollars in My Pocket” 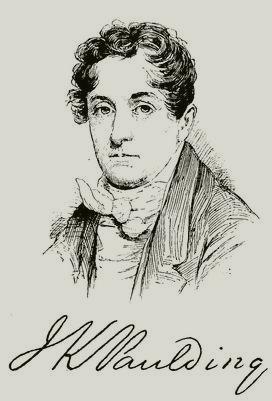 Some time between 1796 and 1797, eighteen-year-old James Kirke Paulding boarded a market sloop at Tarrytown with seven dollars in his pocket. He was headed for Manhattan to seek his fortune. Paulding was a homegrown Tarrytowner, and he knew the people and the landscape by heart. His family lived by Tarrytown Bay. The Pauldings were forced to flee from Tarrytown during the Revolutionary War years and settle into self-imposed exile in northern Westchester. James K. Paulding was born at Great Nine Partners near Peekskill, in 1778.

In early times there were two local Paulding households of note. One was the childhood home of John Paulding, the leading captor of Major Andre; the other was the childhood home of James K. Paulding, Secretary of the Navy and literary collaborator of Washington Irving. John’s father owned a farm “overback,” near the Sawmill River, on the site of the Con Edison facility. James’ father owned a large colonial dwelling located “under the hill,” at the bottom of Franklin Street. The two fathers were in fact brothers, Joseph, who lived overback, and William, who lived under the hill.

If James K. Paulding had never done another thing in his life, he would have earned at least a footnote in history by introducing young Washington Irving to the Tarrytown-Sleepy Hollow region in 1798. It was Paulding who served as Irving’s guide to the region, exposing him to people and places that would be turned into “The Legend of Sleepy Hollow” roughly twenty years later. Paulding’s family was connected to Washington Irving’s by the 1794 marriage of Paulding’s older sister, Julia, to Irving’s oldest brother, William.

By his own testimony James K. Paulding’s childhood in Tarrytown was not a happy one. His family was financially ruined by the Revolutionary War years. His father, William, was a leading Tarrytown businessman, an important Westchester political leader, and a ranking military figure; by the end of the war he was bankrupt and imprisoned for debt. It was James K. Paulding’s job, at six or seven years of age, to bring his jailed father fresh clothes and other articles. The boy rode to the log prison in White Plains each Saturday on an old, borrowed horse. In 1785, the prison burned down and the father walked home, remaining free and without further trouble from the (apparently sympathetic) authorities.

Before the war, in 1767, the father had located his growing family to Tarrytown after making a small trading fortune—some say illicitly—on the Island of Hispaniola and in Manhattan. William Paulding’s family moved into a new, large home at the southwest corner of Water and Franklin streets, just a few paces from Tarrytown Bay. There, amid a small cluster of waterfront homes, Paulding also owned a store and wharf, keeping up a good trade between local farmers and Manhattan. During the war, William Paulding was made a colonel and appointed the commissary for New York State, north of Kingsbridge. This job proved to be a nearly impossible one, and he resorted to using his own credit to finance the needs of the army. That is apparently what landed him in prison for debt.

With the father in prison, his wife, Catharine Ogden Paulding, vigorously applied herself into the considerable task of supporting her family of nine children. She managed to hold on to her home by getting friends to buy it and then mortgage it back to her. She sewed from dawn to dusk, and saw to it that most of her children had, at least, some schooling. James later wrote, “[She worked] with a cheerful alacrity that diffused itself over the whole house…. All that I have ever been I owe to her.” He recalled that, at times, there was barely enough food for all.

Unlike his friend, Washington Irving, James K. Paulding carried from boyhood a distinctly anti-British bias, common to Westchester families that had survived the terrors of the “Neutral Ground.” James’ maternal grandfather, it is said, was permanently handicapped by the cruelty of British soldiers.

As a boy, James became a dreamer and a loner. His older brothers were sent to school in New Jersey, and he lamented that had no friends of his own age. He later wrote, “I grew up to the age of seventeen or eighteen, a sheer, abstract man—a being of thought rather than action.” The insolvency of the family meant that most of their books were taken for debt, but young James immersed himself in the scattered few that remained.

During ages six to nine (1784-1787) James was sent for instruction to the Sleepy Hollow School, which was a kind of log hut that stood about two miles north of his home. He walked there alone each day. Later it was agreed that he would live for a time with his overback relatives, who were obstensibly located closer to the school. At his uncle’s house, James’ only child companion was a little girl who could not speak.   He recalled that one-day he and his fellow students arrived at the schoolhouse only to find the schoolmaster permanently gone. This individual appears to have been the very Samuel Youngs who is credited with inspiring the fictional schoolmaster, Ichabod Crane. Paulding remembered that his schoolmaster departed to fill the much more lucrative (and perhaps prestigious) job of county surrogate judge; Youngs did in fact become the county surrogate, but not until twelve years after the time mentioned by Paulding. Yet, the new surrogate of 1787, Philip Pell, could not have been the Sleepy Hollow schoolmaster that Paulding remembered.

All told, the three years of schooling cost the Paulding family fifteen dollars. Returning home, James K. Paulding’s unhappy childhood continued, “From the experience of my early life I never wish to be young again… My life at Tarrytown after leaving school was weary and irksome. The present was a blank and the future almost a void.” He distracted himself by hunting and fishing in Tarrytown and Sleepy Hollow, “I spent my time in reading, or roaming at random and unpurposed, through the beautiful romantic scenes which surrounded our poor, yet pleasant abode.” The book that had the greatest impact on him during these years was Oliver Goldsmith’s The Citizen of the World.

It is likely that Paulding first met Washington Irving during the 1794 wedding of their siblings at Tarrytown. Irving would have been eleven at the time, Paulding—sixteen. Who knows whether they found anything to talk about? But four summers later, they were fast friends and destined to remain so. Paulding guided young Irving to the Sleepy Hollow and Tarrytown haunts that he had frequented as a lonely child. That was only a year after Paulding had left home for Manhattan with seven dollars in his pocket. 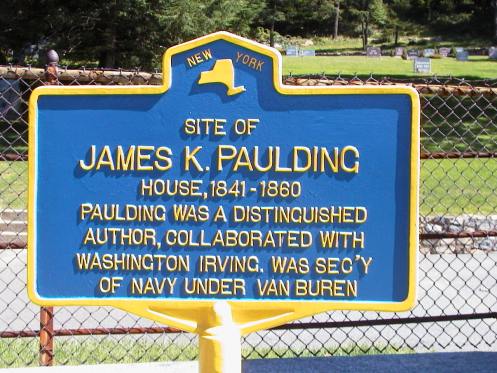 Paulding’s career would bring him affluence, fame, and influence. He and Irving progressed from the funny, sneering “bad boys” of their early, literary partnership, “The Salmagundi Papers,” into two of the most respected literary voices of the early United States. Paulding was to head the U.S. Navy during the Van Buren years. He finished his days on his own Hudson River retreat, “Placentia,” at Hyde Park on the Hudson River—dying a few months after the death of his life-long friend at Sunnyside.

Just In… A Note from the Past… Rockwood Hall